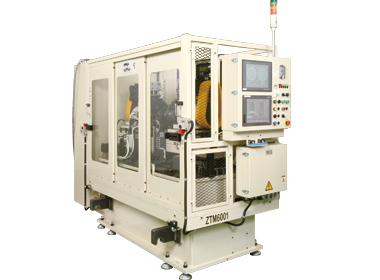 In case of modern lightened crankshaft production, it is difficult to satisfy both of keeping counterweight amount and removing the unbalance from counter weight. To satisfy both, it is effective that starting the crankshaft machining at the center based mass center.
400MBRZ is the mass center measuring machine for in-line four-cylinder crankshaft and in-line three-cylinder. 400MBRZ measure and determine the position of mass center hole automatically.

Micro Processor Measuring Unit MMi-902MS
This is consisted measuring unit and panel computer with TFT panel.
Setting of MMi-902MS is available by touch panel operation. MMi-902MS can be maintained easily, since it has self-diagnostics function and module system.